Gospel for Asia’s clean water ministry is delivering clean, disease-free water to families across South Asia because of people like you.

In South Asia, finding water that will not cause death in the family is a difficult challenge many face. Women and children are forced to walk hours a day to find water sources such as filthy ponds or lakes, which are oftentimes contaminated with waterborne illnesses. Sometimes they know this will bring death and sickness to their families, but they have no other option. People Are Thirsty. “Almost all rivers are dry right now,” shared one Gospel for Asia worker, Daniel. But the water shortage in his village of Andhra Pradesh, India, was just beginning. “The real drought will come in the summer days…We have to wait almost six and a half months for the rain to come.” Not far away, Gospel for Asia Pastor Layak spoke of the water shortage his people faced.” In the summer especially, the people here would bring water from the other villages,” he says. “The nearest village is at least four miles away.”

A Jesus Well provides pure water for an entire village full of thirsty people for only $1000. With clean water, the health of the people improves significantly. Since a Jesus Well is drilled deep into the ground, it is less likely to dry up during the hot summers in Asia. Through the provision of clean water, villagers are open to hearing about the God who loves them and provides for their needs. The Lord has used Jesus Wells profoundly. The water is freely offered to all, regardless of their religious background. But His love, demonstrated so clearly through the Jesus Well, makes such an impression on the people’s hearts that many choose to follow Him.

A Wise Investment
Although other water well projects can cost several times as much, Gospel for Asia is able to drill a well for only $1,000. When drilling a well, GFA hires a local contractor. Because that same contractor will be hired to drill a large number of wells, he will give a lower price per well. Additionally, most contractors in South Asia use simple equipment to drill and install wells, so their costs are low from the start.

Millions in Asia are without clean water. 3.4 million people die each year from water-related diseases. That’s almost the entire city of Los Angeles, CA. Diarrhea is the second leading cause of death among children under five in the world. Around 1.5 million deaths a year, nearly one in five, are caused by diarrhea, which kills more children than malaria, AIDS, and measles combined. Globally, women spend 200 million hours a day collecting water. This is equivalent to building 28 Empire State Buildings each day. 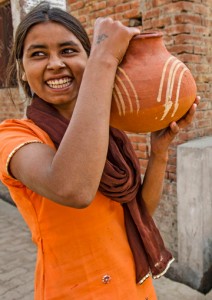