10 Uplifting and Inspiring Movies You Need to See

Though there’s no escaping the inevitable disappointments and discouragements of life, thankfully we do have a choice in how we respond to life’s hardest moments.  Some seasons of life necessitate talking to a counselor or a life coach. Others call for reading good books in hard times and leaning into the encouragement of an uplifting and inspiring movie. And let’s not forget a side of dark chocolate too of course  😉

Though I can’t offer you chocolate, what I can offer you is a handy list of movies that will encourage you in a whole range of life seasons.  Whether you find yourself with dwindling faith, craving purpose, feeling lonely, needing inspiration or even crumbling under the weight of a difficult marriage – you’ll find a movie here to meet you right where you’re at. 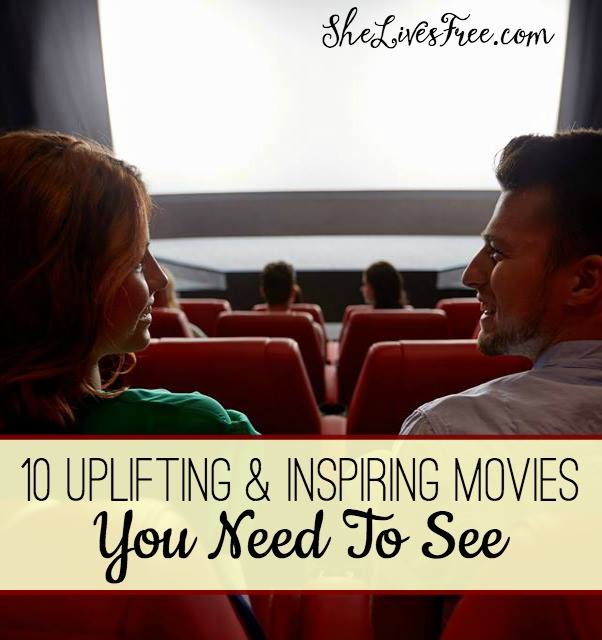 What It’s About: Calvin Campbell is a former professional baseball player sent to an early retirement due to his panic attacks at the plate. Even though he had all the talent for the big leagues, he struggles with the curveballs life has thrown him. His life is in a slow downward spiral when it is suddenly awakened and invigorated by the most unlikely person – Produce, a young-man with Down syndrome who works at the local grocery store. Faith, work, purpose and most importantly family, blossom into Calvin’s life as their friendship develops.

Why I Love It: This movie is currently in theaters, however it has received overall positive feedback for its story and message of redemption. Sounds like the makings of a great date night to me!

Where to Buy It: Currently in theaters

Faith of Our Fathers

What It’s About: With the Vietnam War raging in 1969, two young fathers report for duty. A man of great faith and a doubtful cynic. A quarter-century later, their sons, Wayne and John Paul, meet as strangers. Guided by handwritten letters from their fathers from the battlefield, they embark on an unforgettable journey to The Wall—the Vietnam Veterans Memorial in Washington, D.C. Along the way, they discover the devastation of war cannot break the love of a father for his son.

Why I Love It: I love heartfelt stories with themes of family coming full circle. Plus this would be a great one to watch with the hubby

What It’s About: Tony and Elizabeth Jordan have it all—great jobs, a beautiful daughter, and their dream house. But, Tony and Elizabeth Jordan’s world is actually crumbling under the strain of a failing marriage. While Tony basks in his professional success and flirts with temptation, Elizabeth resigns herself to increasing bitterness. Their lives take an unexpected turn when Elizabeth meets her newest client, Miss Clara, and is challenged to establish a “war room” and a battle plan of prayer for her family. As Elizabeth tries to fight for her family, Tony’s hidden struggles come to light. Tony must decide if he will make amends to his family and prove Miss Clara’s wisdom that victories don’t come by accident.

Why I Love It: The idea of doing battle in a war room created to fight for her marriage had me at hello!  I mean, seriously.  What a great reminder we all need our own “war room.”

What It’s About: Angus Buchan, a Zambian farmer of Scottish heritage, leaves his farm in the midst of political unrest and racially charged land reclaims and travels south with his family to start a better life in KwaZulu Natal, South Africa. With nothing more than a caravan on a patch of land, and help from his foreman, Simeon Bhengu, the Buchan family struggle to settle in a new country. Faced with ever mounting challenges, hardships and personal turmoil, Angus quickly spirals down into a life consumed by anger, fear and destruction. However, Angus’ manic quest for material success is slowly transformed into a wild love for God and people, as he wrestles with faith, hope, natural disasters and tragic personal loss.

Why I Love It: Many have heard the common parable about two farmers who prayed for rain – but only one prepared for it. Not only is this a great uplifting film, but it’s also a true story, based on Angus Buchan’s memoir.

What It’s About: As the curtain rises, Hannah hesitantly steps onto the stage for her theatrical debut in college. Yet before she can utter her first lines, Hannah—unscripted—collapses in front of the stunned audience. After countless medical tests, all signs point to one underlying factor: Hannah’s difficult birth. She seeks out her roots, and finds out she was an abortion survivor.

Why I Love It: Unfortunately, the plot – a woman who survived an abortion – isn’t too far-fetched – the story is supposed to have been loosely based on abortion-survivor Gianna Jessen’s life. As an added bonus, the acting and plot were pretty good. Overall, it is a very thought-provoking and poignant film about faith, and forgiveness.

What It’s About: In six years of coaching, Grant Taylor has never led his Shiloh Eagles to a winning season. After learning that he and his wife Brooke face infertility, Grant discovers that a group of fathers are secretly organizing to have him dismissed as head coach. Devastated by his circumstances, he cries out to God in desperation. When Grant receives a message from an unexpected visitor, he searches for a stronger purpose for his football team. He dares to challenge his players to believe God for the impossible on and off the field.

Why I Love It: Although isn’t a Hollywood film, Facing the Giants is a small, yet inspirational reminder of trusting God, even when life is hard and doesn’t go our way.

What It’s About: After U.S. Marine Kyle Wincott is killed in Afghanistan, Max, his highly trained service dog, is too traumatized to remain in service. Back in the U.S., Kyle’s family adopts the dog, but teenage brother Justin has problems of his own and doesn’t want the animal. However, Max may be Justin’s only chance to learn what really happened to his brother. With the help of a dog-savvy friend, Justin and Max begin to bond, and set out to unravel the mystery of Kyle’s death.

Why I Love It: This movie hasn’t released yet, but looks amazing!

What It’s About: When auto mechanic James Busbee is sent to fight the Japanese during World War II, he leaves behind his wife and two sons, London and Pepper. Pepper feels his father’s absence most keenly, and can’t wait for him to return home. An encounter with a magician and advice from a priest convince Pepper that the power to bring his dad back safely may be within himself and his actions.

Why I Love It: Although this movie hasn’t released on DVD yet, it looks like a wonderful story of faith!

The Sound Of Music

What It’s About: A tuneful, heartwarming story, based on the real life story of the Von Trapp Family singers, one of the world’s best-known concert groups in the era immediately preceding World War II. Julie Andrews plays the role of Maria, the tomboyish postulant at an Austrian abbey who becomes a governess in the home of a widowed naval captain with seven children, and brings a new love of life and music into the home.

Why I Love It: This family classic has been enjoyed by everyone 6-106 years old, includes a great cast, and has a fantastic soundtrack!

What It’s About: A young George Bailey, overwhelmed by family obligations and a sense of responsibility toward his community, feels tied down to a company he never had an interest in working for, and a life he never wanted to live. As he ages, he sees his youth, dreams and opportunities pass him by. Unknown to George, all of his friends and family have been praying for him to get through those hard times. Told through the point of view of a group of angels, he is met by Clarence his guardian angel, as he contemplates ending his life.

Why I Love It: Although long and not action-packed like many of today’s movies, It’s a Wonderful Life is a beloved inspiring family Christmas classic – a must-watch, at least once, in everyone’s lifetime.

What are your favorite flicks that help lift your up when you’re down and inspire you when you’re lacking vision?